REPORT | Behind the Scenes at Broadgate 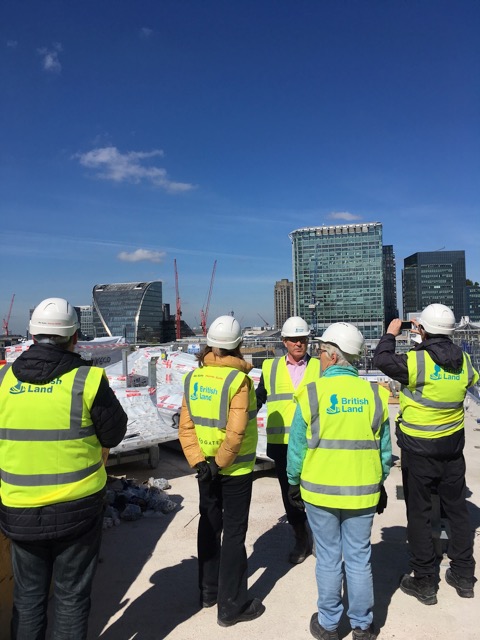 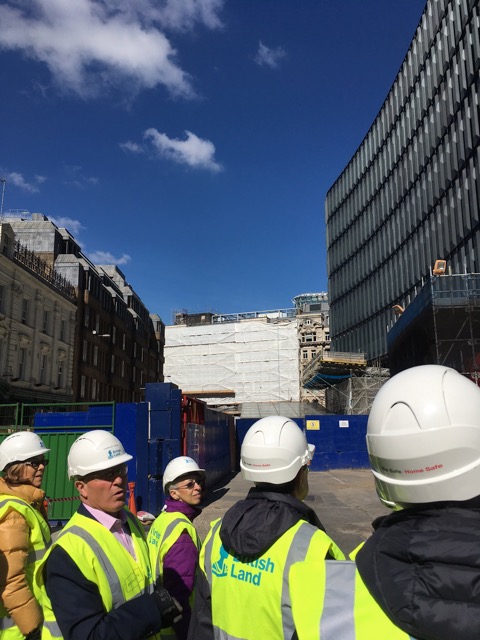 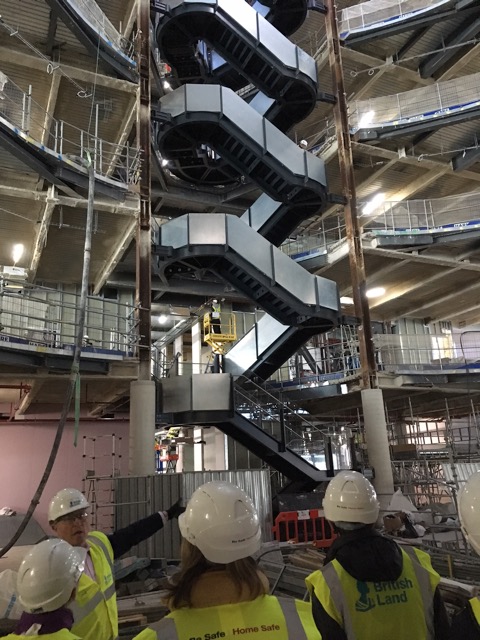 London Society members were fortunate to be given a 'hard hat' tour of the redevelopment work at the Broadgate complex in the City. Roger Cline reports on the visit. It was an early start for an intrepid band of Society members who assembled at 3 Broadgate Square, the marketing suite for the Broadgate re-development. The original buildings were erected in 1981-1999 on the site of Broad Street Station and in the air space over part of Liverpool Street station and were all office block fortresses with security permit entry only. Business practice has changed in the meantime and the blocks are being refurbished to replace the large trading floors by flexible office space close to windows with an emphasis on wellbeing of employees and ‘smart’ operation whereby their mobile telephones will pick up instructions as they enter as to which desk they will use for the day and providing temperature and illumination suitable for the work they will be doing. The wellbeing of employees and public alike will be catered for with extensive retail premises on ground and sometimes several other floors, as well as leisure centres and catering. The security gates will only be located inwards of the office reception area, so the public can enjoy facilities such as meeting areas, coffee shops and wi-fi outside the gates. The whole area is private land with high but unobtrusive security (60-80 security personnel on duty at any time, day and night) so any misuse of the facilities can be dealt with (and may cause them to be restricted). The area is kept clean with the ground floor paving being regularly washed.

Charles Horne of British Land Introduced the scheme and Chris Bannister of Hopkins Architects filled in the architectural detail. The refurbishment work has been going some six years and is due to finish next Spring (although the bankruptcy of one contractor may cause an overrun). British Land is in a joint venture with The Government Investment Company of Singapore, increasing the original 2.2m sq ft of office space by 50%. The ground level is pedestrianised as is Liverpool Street itself, with basement access for vehicle deliveries. Extensive cycle storage and changing rooms are provided but cycling across the site will be discouraged. The Crossrail station entrance is in Liverpool Street and the bus station remains in Sun Street Passage which separated the original Liverpool Street and Broad Street stations. The sloping floor around The Fulcrum (a Cortan steel sculpture in five separate pieces) has been eliminated by underpinning the 360-ton structure and lowering it to the general ground floor level. The site has superb transport access with the Underground including CrossRail as well as the main line station. It is close to the entertainment hubs of Spitalfields, Shoreditch and Old Street. 135 Bishopsgate is the block over Platforms 12-16 of Liverpool Street station and the forbidding 1980s wall separating it from the street pavement has been replaced with steps leading up to ground floor retail sites and an Eataly store, featuring Italian food products, the first in the country. On the western edge of the site is 1 Finsbury Avenue, built by Arup’s and already listed Grade II. In place of the original bankers, that building will house Product Madness, software company and BL’s Storey office solutions for firms only willing to take short leases or small areas, with an Everyman Cinema and ground floor retail and food outlets. Arup’s original work on the site had been meticulous, with careful records kept of the last century building and most of the original piling has been retained with only a few addition piles being driven. The presence of the Central Line and Post Office Railway tunnels across the site adds complication to new piling. On the southern boundary is 100 Liverpool street which extends northwards up Sun Street Passage. The original building was clad in red granite and to accommodate its original trading floors, its atria were located on the east and west sides. There is now glass cladding with a single central atrium which becomes elliptical at the lower floors, the major axis lying east/west. The original building frame has been cut back where necessary and new steelwork and new floorslabs had been inserted. The Station concourse runs through the block at basement level (the building has additional basement premises below the concourse) and escalators bring people up into the retail areas on ground and first floors and the office reception area on the second floor The height of the building has been increased with new floors having terraces on the 6th floor and above, the ninth floor housing a public restaurant with an extensive terrace from which there is a good view of the dome of St Paul’s Cathedral and the West End. The northern elevation of the southern part of the building is tapered, so as to allow sunlight into the central ring structure of Broadgate Square, popular for its bars and cafés. Broadgate Square has Nos. 1 and 2 on the west side to be redeveloped next year and No. 5 on the north side, already refurbished and clad in stainless steel. No. 3 is the small marketing suite clad in bronze and separating the Broadgate and Finsbury Avenue Squares. 2 and 3 Finsbury Avenue have yet to be refurbished. There is no residential accommodation although a hotel is planned for the northern end of the site. UBS is a major tenant and has moved from block to block as the refurbishment takes place. Tenants have been found for 80% of the refurbished space, even though it is not due for completion until next Spring. Most tenants take a whole floor of a building. There are around 400 workmen on site at present. The CrossRail station is an independent project, but it does restrict access to the Broadgate site for deliveries. A Japanese sculpture is being installed at the CrossRail station exit in Liverpool Street. This background information enabled us to appreciate our subsequent tour of 100 Liverpool Street for which we were togged up with boots, helmets, goggles, gloves and high-vis jackets. Charles and Chris took separate groups on comprehensive tours and answered all our questions. We were most grateful for this use of their time in a busy period as the scheme approaches its finale and shall look forward to enjoying the publicly accessible facilities when the scheme is complete.