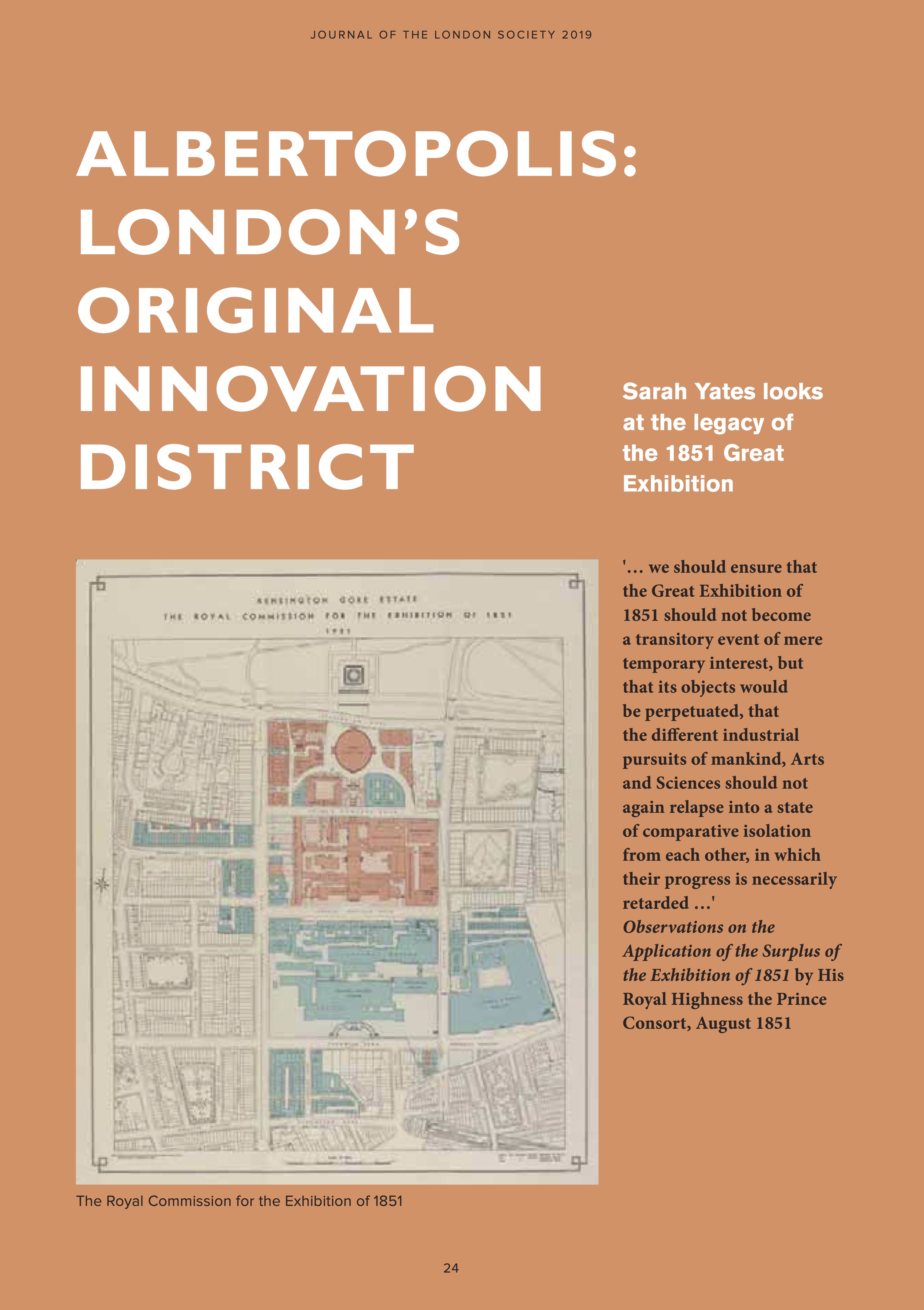 In this article from issue 473 of the Journal of the London Society, Sarah Yates looks at the legacy of the 1851 Great Exhibition

'… we should ensure that the Great Exhibition of 1851 should not become a transitory event of mere temporary interest, but that its objects would be perpetuated, that the different industrial pursuits of mankind, Arts and Sciences should not again relapse into a state of comparative isolation from each other, in which their progress is necessarily retarded …' Observations on the Application of the Surplus of the Exhibition of 1851 by His Royal Highness the Prince Consort, August 1851 The Royal Commission for the Exhibition of 1851

‘Innovation’ has become the watchword of the global economy in the 21st century. While cities have always been places where people gather to discuss and debate ideas, the production of new knowledge – and from it, novel products, services and technologies – can give a city competitive advantage in this age of automation, disruptive technologies and global communication. Fundamental transformations in the way that we work, live and learn have started to lead to greater interdisciplinary collaboration, and physical location and proximity to other like-minded people have become ever more important in order to support the spontaneous personal interactions, sharing of ideas and inspiration that lead to advances in knowledge. From this has developed the idea of the urban ‘innovation district’: places where universities and research centres cluster, along with cultural and scientific organisations and enterprises large and small; designed to attract the most talented and highly skilled, and with a well-designed and diverse urban environment with high-quality public realm to promote open working and collaboration. New innovation districts are emerging across the capital – from the Knowledge Quarter at King’s Cross to the Cultural and Education District planned for the regeneration of the Queen Elizabeth Olympic Park.

But the origins of this idea in fact stretch much further back to the mid-19th century, and are still thriving today in the remarkable and unique ‘great estate’ in Kensington known familiarly as ‘Albertopolis’. This, the world’s first innovation district, was created and overseen by the nearly 170-year-old Royal Commission for the Exhibition of 1851. This world-renowned cluster today encompasses one of the UK’s top universities, Imperial College, and globally significant cultural and scientific institutions including the Science Museum, Natural History Museum and Victoria and Albert Museum, collectively attracting more than 30 million visitors each year. The Commission’s governing principle has remained at the heart of its purpose since its foundation: to ‘increase the means of industrial education and extend the influence of science and art upon productive industry’ – or, as its Secretary, Nigel Williams, explains, ‘making things look better and work better through the combination of science and art', a mission reflected in the UK Government’s latest Industrial Strategy.

Where it all began The Commission owes its foundation in 1850 to the singular vision of Prince Albert, its first President, and was established under his direct supervision to organise and stage the Great Exhibition of the Works of Industry of All Nations (‘The Great Exhibition’) in Hyde Park in 1851. Featuring more than 100,000 exhibits from around the globe in Joseph Paxton’s iconic Crystal Palace, the exhibition, known as the first ever world’s fair, enjoyed unprecedented success, attracting six million visitors in under six months. With visitors paying an entrance fee of about five shillings, plus a penny to use the flush toilets (a technological marvel of the age), the Great Exhibition generated a surplus of £186,000, estimated by some today to be the equivalent of up to £40m. Presenting his views on how these funds should be used, Prince Albert proposed the purchase of land on Kensington Gore and to ‘place on it four Institutions corresponding to the four great sections of the Exhibition: Raw Material, Machinery, Manufactures, Plastic Art.'

In the end, the Commission bought 87 acres in South Kensington, principally market gardens, and the estate evolved in a rather different way to that originally proposed by Prince Albert, who died in 1861. Initially the land was leased to the Royal Horticultural Society to create large formal gardens, surrounded by exhibition galleries and, to the north, the Central Hall of Art and Science (renamed the Royal Albert Hall by Queen Victoria), which opened in 1871. As Nigel Williams points out, this building was originally intended, like the purpose-built ‘spaces for collaboration’ today, to be a ‘great meeting place of men of art and science – not primarily as a concert hall.' The Commission also helped establish what became the Victoria and Albert Museum, the Natural History Museum and, later, the Science Museum. The Royal Horticultural Society surrendered its lease in 1878, making way for the Royal College of Science, The Royal School of Mines, the City and Guilds College and the Imperial Institute, which all merged to become Imperial College in 1907. The Royal Colleges of Art and Music were also established in this period.

In this way the estate encompassed all the spheres of knowledge, growing over time to create a great centre of learning and innovation. By the late 19th century, the estate was almost fully developed, and featured the work of the leading architects and engineers of the day, including Alfred Waterhouse and Sir Aston Webb. The centrepiece was TE Collcutt’s Imperial Institute, completed in 1893, with its three Renaissance-style towers, of which one, known as the Queen’s Tower, survives. By 1891, partly through the sale of the museum sites to the Government, sufficient funds remained for the Commission to establish an educational trust to perpetuate its charitable aims. Having created an outstanding centre of excellence, the Commission continues to play a vital role in supporting innovation by providing grants, fellowships and scholarships for research in science and engineering, applied research in industry, industrial design and other projects – including the built environment – through a total annual fund of nearly £4m. Its alumni include 13 Nobel Prize winners and more than 150 Fellows of the Royal Society. This is funded largely through an investment portfolio, as while the Commission remains the main ground landlord – the Royal Colleges of Music and Art, Imperial College and the Royal Albert Hall are let on long leases – and retains ownership of some 40 residential properties, other freeholds were sold or transferred.

The key principle in the management of the estate today is to continue to enhance its status and ensure its cohesion as a world-leading centre for excellence and cultural quarter. In February 2010, architectural practice DSDHA was awarded a two-year Research Fellowship in the Built Environment to develop a long-term vision for the estate, specifically the public realm around the Royal Albert Hall. In 2016 it received the Fellowship to explore the idea of the ‘Beautiful Everyday Journey’, to make cycling ‘a more pleasurable, exciting and accessible mode of transport’. Facilitating networks and cooperation alongside research is regarded as a vital component to driving innovation – ‘the exchange of ideas by personal discussion,' as Prince Albert argued in his Observations – and the Commission has an active role in convening the leaders of the major legacy institutions of the estate to encourage effective coordination in placemaking and new development, working together to ensure Albertopolis maintains its status as a world-leading innovation district. It also has a unique international alumni network – with more than 70 new grant holders each year – and a major digital project to support both online and real-time networking and collaboration anywhere in the world among alumni was completed in spring 2018. Embodying the intersection of technology and creativity along with outstanding research over a century and a half, today the Commission and its estate – like the emerging innovation districts now appearing in cities around the world – seeks to support the brightest and best of each generation to advance human knowledge, and, through it, to benefit society as a whole.

For more information about the Royal Commission for the Exhibition of 1851 and the research it supports, visit: royalcommission1851.org @Royalcom1851 Many thanks to Nigel Williams, Secretary, and to Jenifer Hewett, Senior Administrator, and Angela Kenny, Archivist, for their help, time and support in providing information for this article.

Sarah Yates is an editor and researcher and co-author of the New London Architecture reports Knowledge Capital: Making Places for Education, Innovation and Health (2018) and Great Estates: How London's Landowners Shape the City (2013)