The Fall and Rise of Social Housing 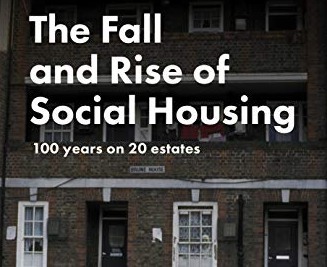 Professor Becky Tunstall on her new book, The Fall and Rise of Social Housing

I have been tracing the history of 20 council estates, 11 in London, from when they were first built to today. They typified the minority which had become unpopular by the early 1980s, and which has, unfairly, come to stand for all social housing.

Lots of research has recorded the fall of estates and council housing as a whole. This study provides an update - and good news. What were unpopular council estates in the 1980s, with crime, neglect and empty homes, are today fairly popular mixed tenure neighbourhoods. Only 3 of the estates remain council owned and managed. 3 are mainly owned by housing associations, and 5 are managed by ALMOs and other organisations. The Right to Buy had a delayed but dramatic effect, until it was put out of reach by price rises in the 2010s. All have large private rented sectors. Homes meet the Decent Homes standard. Estates are generally clean, safe and orderly. The 6 deck access and tower block estates have been reorganised and security is a selling point for estate agents. In 2011, resident unemployment was lower than for thirty years. In 2017 achievement at schools serving the estates beat the national average.

The ‘fall’ of the estates was neither inevitable nor irreversible. Poor design and management, often seen as chief culprits, played some role, but problems were the products of time and place. When new, they provided space and facilities many other Londoners did not have. By the 1970s, the 5 older estates had gone decades without modernisation because of the focus on building. Building alongside decades of planned population dispersal produced a pause in demand for social housing, just when the younger estates arrived on the market. Unemployment was jumping nationwide. A 20-year crime and vandalism boom was about to start. The GLC and boroughs hadn’t adapted management to the unprecedented scale of their stocks and management and social problems.

Step by step, over the 1980s, 1990s and 2000s, local housing management, belated maintenance, improvements and large-scale redevelopment put the estates and their residents in a position to benefit from London-wide transformations: falling crime, falling unemployment, improving services, rising population and growing demand for affordable housing. In the 1990s, one of the estates pioneered on-site development for market sale to fund improvements. In the 2000s, another was completely rebuilt in mixed tenure, and 5 more had some demolition. They avoided major loss of social housing, but others using the same methods have not.

The challenge now is to maintain improved conditions in these and other estates despite a return to remote management and limits on investment. History reminds us that 3 of the estates started out in the 1930s, 1960s and 1970s with high rents and exclusive allocations policies. As well as increasing the supply of social renting in London, we need to keep it open to people currently stuck in private tenancies and temporary accommodation or being offered homes outside the city.

Prof. Rebecca Tunstall is the Former Centre Director & Joseph Rowntree Professor of Housing Policy at the Centre for Housing Policy, University of York

The fall and rise of social housing: 100 years on 20 estates, is published by Policy Press and is available here