BOOK REVIEW | Outskirts: Living Life on the Edge of the Green Belt 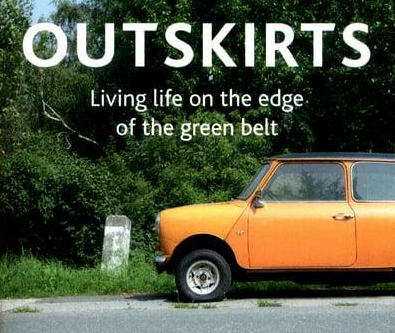 Outskirts: Living Life on the Edge of the Green Belt

Ostensibly about the Green Belt, Outskirts is in fact a moving reflection on British life. Part autobiography and part history, it demonstrates the author's mastery of storytelling through a personal and touching exploration of the relationships we all have to places; imagined and actual, nostalgic and immediate.

‘I live in the last road in London,’ John Grindrod would tell people when growing up. It wasn’t strictly true, but New Addington is encircled by the Green Belt, which started at the end of the family garden. Now amongst Croydon’s most deprived wards it is a mid-century settlement which, much like the Green Belt itself, embodies Britain’s postwar consensus.

A long-format historical account of the Green Belt has been waiting to be written. It’s amazing, given the extent to which the concept has become embedded in the national consciousness, that this is apparently the first attempt. To some extent, such a book could still be written.

Outskirts is no traditional history book. It comes close to anthropomorphising the Green Belt. Grindrod recalls his childhood experience in such a way that the two histories are woven together. Memories and facts for both family and Green Belt are placed side-by-side as if the latter was a relative that lived nearby and joined in on family trips.

The book abounds with heart and soul.  There is an inescapable immediacy to the honest recollections of his parents: ‘John the dyslexic, Marj with her love of words... the indestructible superwoman, held together with Disprin, tea and irony.’ There is empathy throughout: ‘To city dwellers the Green Belt is tightening around our throats. To country folk we are ignorant barbarians, intent on its destruction.’

This could make Outskirts the most popular contribution to Green Belt discussion in the past 50 years. The facts are there: the same facts as used in other reports, papers and articles. Yet, taking Amazon reader reviews as a litmus test, there are no indignant calls to arms, no accusations of vested interests or collusion. Of the 21 posts thus far, all offer four or five stars.

In 1993 John Major spoke to the Conservative Group for Europe about another defining issue of our age. He conjured a vision of Britain as ‘the country of long shadows on county grounds, warm beer, invincible green suburbs, dog lovers and pools fillers’ in which ‘we trust our own integrity as a people quite enough to fear nothing in Europe’. Grindrod expresses no clear opinion, but Outskirts could be read as an everyman’s re-making of the same case.

Outskirts blends recollection of days out with a tale that takes us from Thomas More’s Utopia (1516) to the present day, reminding us how the often emotive and irrational feelings that make us human are so instinctively imprinted upon otherwise straightforward and rational public policies. Grindrod reveals how a simple technical designation can become something so meaningful to so many people. If for no other reason, this makes it a must read.