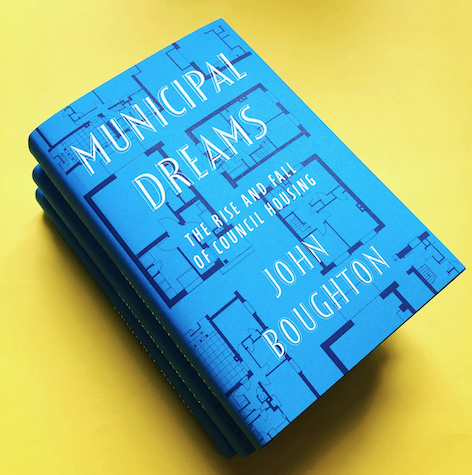 Municipal Dreams: The rise and fall of council housing

(Review from issue 493 of the Journal of the London Society. Buy your copy of the Journal here, or get a free copy when you join the Society) News that a book has been commissioned on the back of a popular Twitter account is often a cause for eyebrow-raising annoyance peppered with professional jealousy, but that wasn’t the case when Verso announced they’d be publishing the first book by John Boughton, who tweets as @municipaldreams. That’s because Boughton’s tweets – and his superb blog of the same name – are on the history of social housing, about which Boughton has become a sort of house historian. On his blog, Boughton studies in detail a different housing estate with each post, describing its social history and architectural appearance before, in most cases, exploring the various ways it has been neglected by local councils committed to Thatcherism, either by force or ideology.

In Municipal Dreams, he takes a broad overview of the history of council housing from the Victorian era to the present day. Although there are occasional forays overseas to see how things are done elsewhere, his history is largely confined to England and increasingly to London, where ‘the spate of high-profile housing struggles in recent years testify to the dysfunction of the London housing market.’ Boughton is a reassuring guide through this story. He’s a sincere and convinced advocate for state-built housing and rightfully sees no shame in the ambition and idealism exhibited by post-war planners, but is neither blind to occasional failures nor so politically motivated he cannot accord success where deserved. This balance is particularly relevant in the later sections, when the consensus regarding the moral need and positive benefits of state housing was ended by Margaret Thatcher’s Conservative government, whose beliefs were effectively embraced by Tony Blair’s New Labour. Boughton fumes throughout this sorry era, but also gives credit on the few occasions it has been earned. London is a major part of this story, starting with the pioneering Boundary Estate in Shoreditch, which opened in 1900 and now offers two-bed flats for a monthly rent of more than £2,000 to City bankers. Boughton takes in numerous London estates, from the vast and rather dull Becontree Estate to the wonderful post-war estates built in Camden by Neave Brown, (see Cook's Camden review). Historical nuggets are liberally applied – a particular favourite was the news that at Stalag Luft III, the Second World War PoW camp from which the Great Escape took place, a group of prisoners took a break from depositing earth down their trousers to debate Abercrombie’s County Of London Plan. It’s the post-1979 section that feels most important though. Boughton carefully and painstakingly takes us through the various government interventions that led to the ‘residualisation’ of council estates – that’s the process by which social housing became repositories for the poorest and most desperate of society. As Boughton points out, this was not the original intention of state-built housing but it was one that was guaranteed to create a race to bottom – thus creating the selffulfilling prophecy that council estates, in and of themselves, are breeding grounds for crime and deprivation. While he’s unimpressed by New Labour’s record on housing, Boughton reserves most scorn for David Cameron’s 2016 promise to ‘blitz’ poverty by demolishing 100 of the ‘UK’s worst sink estates’, noting that the conditions Cameron decried were directly caused by the policies Cameron advocated. That brings us to the place of social housing in London’s deranged housing market. Boughton looks at various important recent London stories, including the crazed destruction of the Heygate Estate, the shameful artwashing of the Balfron Tower, Lambeth’s attempts to demolish Cressingham Gardens and Central Hill, and the campaign to protect the residents of the New Era in Hackney. He finishes with the horror story of Grenfell, pondering the role the tragedy may yet play in causing a major shift in our housing policies. Even if he underestimates the role the issue of housing played in the surprise result of the 2017 general election, Boughton ends on a note of cautious optimism, with the suggestion that the construction of public housing may once again be the subject of a political consensus thanks to ‘the failure of the free market to provide good and affordable homes to all those who needs them’. If that still feels some time away – Labour are still not looking ready for government, the Conservatives are still afraid to admit that the flagship policy of Thatcherism, ‘right to buy’, has been a national disaster – he is surely correct that the case for a return to state-built housing will soon become too pressing to ignore. Peter Watts is a London writer, and author of Up in Smoke: The Failed Dreams of Battersea Power Station (Paradise Road). He blogs at greatwen.com