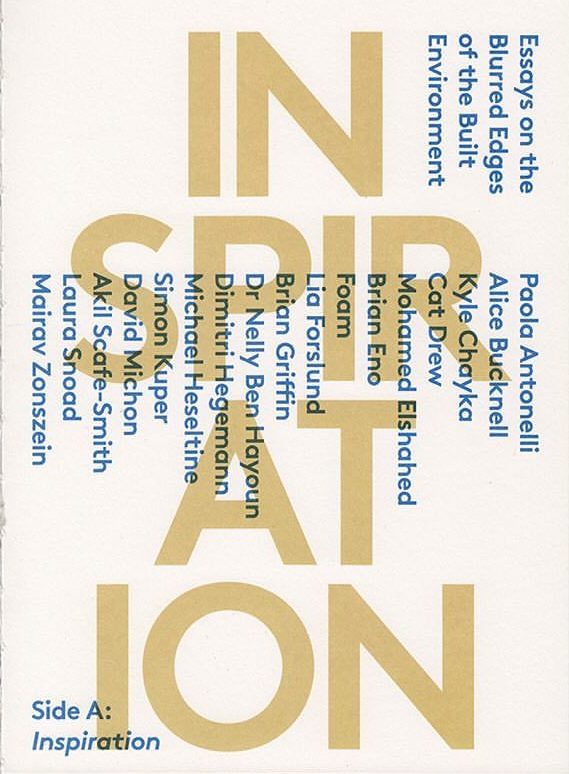 Inspiration | Provocation: Essays on the Blurred Edges of the Built Environment

A natty little publication from London Society friends ING media, which you can get for free.

Innovation / Provocation is a collection of thoughts, essays, images, and general musings occupying the space between the built environment and everyday urban life. While the content is nothing if not eclectic -  ranging from Brian Eno's airport music to a 1980s property brochure starring a giant tie (ING is a communications agency specialising in the built environment and the book is essentially a creative calling card) – it includes are several pieces that offer provocative inspiration for a future London that values its past. First to catch our eye was an interview with Michael Heseltine, former Conservative minister and key protagonist of post-industrial regeneration, particularly Urban Development Corporations. For younger readers, he's largely responsible for what happened to London Docklands. This was a chance for interviewer Akil Scafe-Smith, cofounder of design collective Resolve, to challenge Lord Heseltine on his urban development legacy (AS-S: 'displacement of existing communities'; MH: 'a massive regenerative opportunity'), and what he might have done differently (talk to local people). The piece was extracted from a longer interview, and it's a pity there's no link to the full version.

Next was an engaging read by long-time chronicler of sports stadiums, Simon Kuper in which he celebrates the 'social glue' that a local team provides to a community through shared rituals, urban identity and the emotional bond of fandom. For Londoners in a city with 11 professional league football teams alone, and visibly passionate fans, what Kuper describes is highly familiar, but there are cautionary tales: the trauma experienced by Brooklyn Dodgers fans when their baseball team was uprooted to Los Angeles in 1957, and how the loss still resonates 60 years on; statistics showing a correlation between a rise is suicide rates and the removal of a team to another town, where already troubled individuals lose a vital social connection. From rehoused Arsenal and West Ham, to plucky sixth-tier Dulwich Hamlet FC fighting for their ground, via the shipping out of Wimbledon FC to Milton Keynes in 2004, Kuper's essay should give clubs, developers and fans food for thought. Kuper and Scafe-Smith's pieces appear in the 'Provocation' half of the journal; flip it over and it becomes a second book, 'Inspiration'. Here you'll find a timely call for community empowerment from Cat Drew, director of strategic design consultancy Uscreates. Putting the case for all of us citizens to have agency in the future of our cities, she offers up some cheering examples that could point the way: Camden's Citizens Assembly; a healthy eating initiative in Hackney; the inclusive work of architects We Made That; participatory budgeting schemes in Paris, Lisbon and Porto Alegre (Brazil); and the use of VR to help communicate complex regeneration plans in New Rochelle, New York. And finally, it would be a happier city if the guardians of London's public realm gained inspiration from some of the global innovations featured: the heated concrete benches that warm the good folk of Gottsunda, Sweden; Copenhagen's 750m-long Superkilen (and super-fun) park that incorporates something from every nationality resident in the area; or the Croatian 'sea organ' played by the tide, which would be a great addition to London's embankment (is it too late to incorporate one into the new Thames Tideway Tunnel?). To request a copy of Inspiration | Provocation: Essays on the Blurred Edges of the Built Environment, email publication@ing-media.com

Jessica Cargill Thompson is a freelance writer, editor and urban researcher, and Editor of the London Society's annual Journal