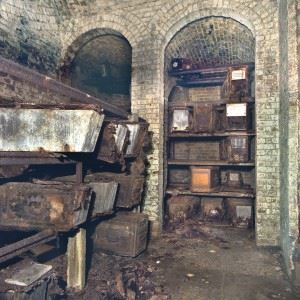 The London we see is only half the picture - beneath our feet are tunnels, catacombs, bunkers and other hidden spaces. Nick Catford shares some of them with you at this talk.

Nick Catford is a world-renowned cameraman and is one of the most accomplished subterranean photographers working today, specialising in sites of cold-war, military, transport and industrial archaeological interest.

Nick's presentation is based on material in his book Secret Underground London which is a comprehensive photographic record of a hidden world which lies beneath the capital but which is not generally seen by the public. Included in this book is a miscellany of sites, from the disused tube stations and closed sections of the London underground railway system, many of which were given some other lease of life, to the secret central government and military bunkers - operations rooms and control centres - which protected London against the German bombers during the Second World War. His book also tells the story of London's Cold War bunkers, never used in anger; and similarly the more modest Royal Observer Corps posts. There are air raid shelters, large and small, public and private; mines and underground quarries, some going back to the 17th century, and tunnels of all sorts: pipe tunnels, horse tunnels, tram tunnels, service tunnels, and the tunnel under the Thames Barrier. Last but not least, and not for the fainthearted, is a collection of photographs showing the capital's creepy Victorian cemetery catacombs.

Nick was granted unprecedented access to many of the sites in order to compile the collection of images reproduced in this book and many of these will be included in his presentation.