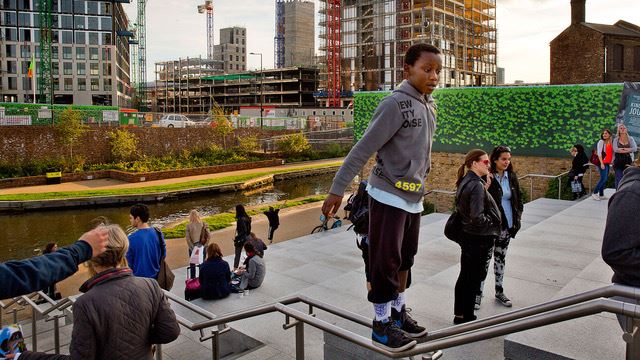 Can the urban design of a city be sexist? Ageist? Racist? The future of London depends on people choosing to live – and stay – in the city.

That means creating accessible and inclusive places where people can comfortably participate and belong. But the people making our cities, from politicians to architects, aren’t the most diverse group of individuals.

So how are we doing? What is the user experience of the city today? And how can we plan for the future, designing an inclusive city where citizens thrive? How do we make sure all voices are heard and perspectives are recognised? How will climate change aggravate the wealth and social gaps in the city, and how can we plan for it?

Danny Ball is a blind neuroscientist who studies how to develop urban spaces so they can be safely and independently used by all.

Alexander Fefeghais the co-founder & head creative technologist at COMUZI, an experimental design studio. COMUZI work with innovators to explore, imagine, prototype and test emerging tech ideas that benefit humans and business. Alex has been recognised internationally in recent times for his work investigating the ethical implications of AI, algorithmic bias in regards to race and gender and exploring future technological interfaces that we as humans will interact with.

Victoria Simpson is an architect and associate director at DLG Architects, most recently shortlisted for the RIBA Rising Star awards for driving the industry forward.

Elli Thomas is a Lead Advisor at Design Council, where she advises local authorities, public sector organisations, infrastructure providers and estates on how to create better places by design, and manages Design Council’s work on inclusive design training with MHCLG and Transport for London. She is an urban designer and town planner and previously worked as a researcher for Centre for Cities.

The evening is the fourth in a series of six debates organised by RTPI London and The London Society that look at different aspects of London's urban planning and how the process affects us all. Image | © Arup, Cities Alive