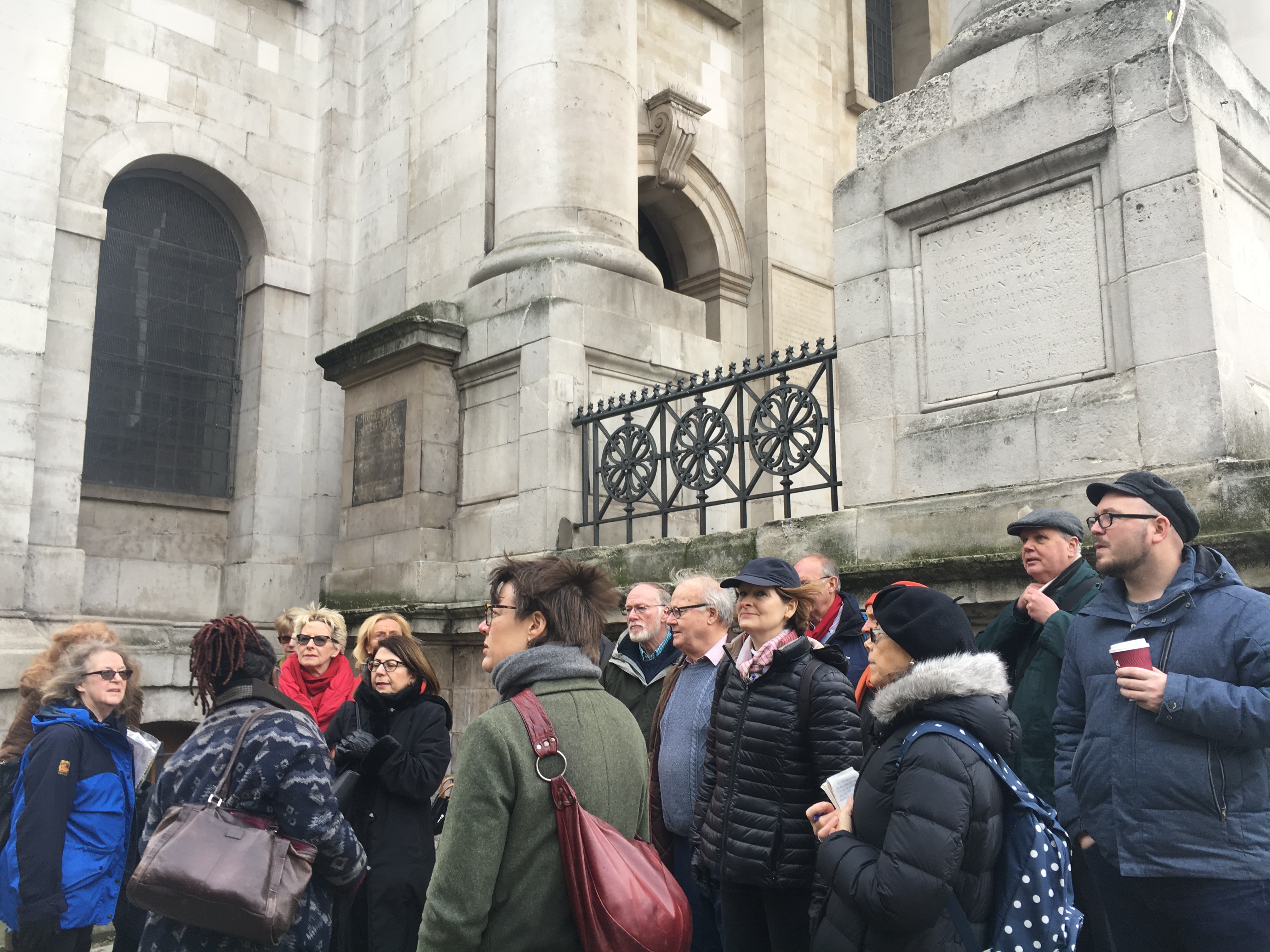 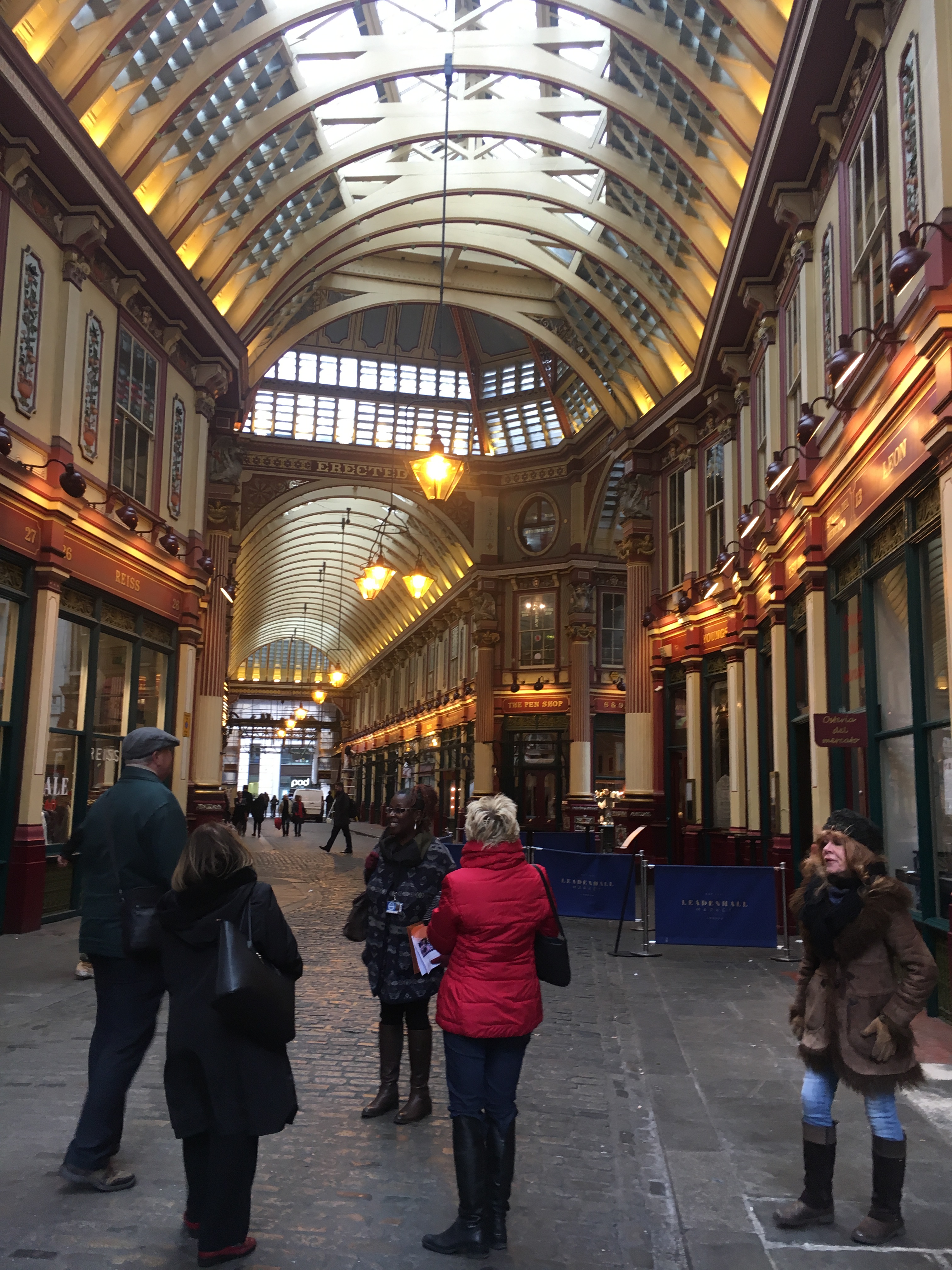 The Society's recent sold-out walk with Blue Badge Guide Angela Morgan visited the rejuvenated markets of Spitalfields, Brick Lane and over to the foodies' paradise of Borough Market. Hannah Murphy went along.

“It was market-morning. The ground was covered, nearly ankle-deep, with filth and mire; a thick steam, perpetually rising from the reeking bodies of the cattle, and mingling with the fog, which seemed to rest upon the chimney-tops, hung heavily above… Countrymen, butchers, drovers, hawkers, boys, thieves, idlers, and vagabonds of every low-grade, were mingled together in a mass…” (Oliver Twist)

On Saturday 27th January, we gathered around the Goat Statue in Bishop’s Square, Spitalfields, to learn about the significant role that street markets have played throughout London’s history. Our tour guide, Angela Morgan, quickly explained that just as a goat climbs a mountain with grit and perseverance, the residents and stall holders of Spitalfields have had to fight to remain culturally relevant in a society that is constantly changing. We discussed rapidly rising business rates and rents, which were pushing SME’s out of the area in search of more affordable rents. We wandered through Spitalfields Market and past the London Fruit & Wool Exchange, a historic and iconic building once used for selling fruit and wool exports, now being transformed into a large office and retail development. As the city centre encroaches towards the market it is clear that there are changes happening, but the question is ‘who is the change benefiting?’ As we went down Brick Lane Angela painted a picture of Victorian times when the street was full of merchants selling goods (as described by Charles Dickens in ‘Oliver Twist’. Like many markets across London, Brick Lane is rapidly changing and becoming increasingly what could be described as ‘hipster’. Following Brick Lane, we headed to Middlesex Street, previously known as Petticoat Lane. Petticoat Lane was once described as the ‘greatest market of all time’ selling clothes, shoes and other household goods, but now remains largely empty and has only been given two stars on Trip Advisor. We discussed gentrification and what could be done to improve the area while retaining its historic importance. We visited Leadenhall Market, with its brightly painted Victorian architecture and stalls selling flowers, cheese meat and other fresh food. We learned about a goose named Tom who had a pub named after him and that the market has also been used as ‘Diagon Alley’ in the filming of the Harry Potter films. Next we ventured down Pudding Lane pondering the Great Fire of 1666 and the significant influence it had on London as a place in terms of housing standards, architecture and town planning. We then crossed London Bridge and gathered on a courtyard overlooking the Thames where Sir Walter Raleigh’s words were boldly imprinted onto the river barrier:

'There are two things scarce matched in the universe: the sun in heaven and the Thames on earth'

Angela explained that the original London Bridge had been built in 1831 and after it was discovered to be sinking into the Thames in the late 1960’s, unable to cope with the 21st Century traffic demands, the Bridge was sold and relocated to Arizona, America where it still stands today. As we finished the tour, the smells of the delicious food from Borough Market reminded us it was time for lunch. A big thank you to Angela, for her detailed and insightful account of London’s markets through time and for helping us understand the challenges facing these markets today.
See all posts
Top