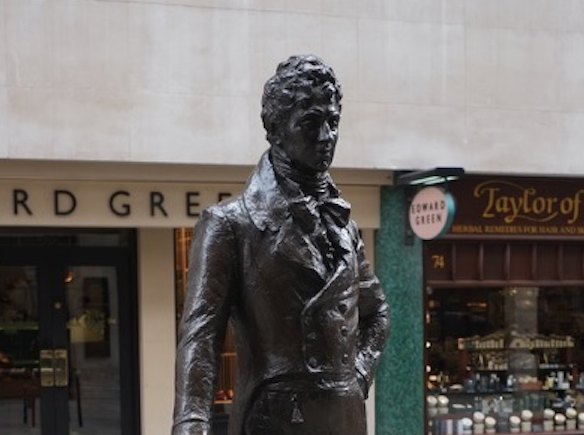 Dr Alina Congreve writes about the public art collection around Piccadilly, from the last London Society event before lockdown, one of our 'public art' walks.

In mid-March, the London Society held a walking tour around Piccadilly, just as the city was starting to shut down. I must have walked around the area dozens of times to see exhibitions at the Royal Academy, concerts in St James’ church and meetings at the Town and Country Planning Association without pausing to look at any of the public art. The guided walk with Anne-Marie Craven from the London Society made me look more carefully at these varied pieces. I’m a Trustee of Harlow Sculpture Town, and in trustees meetings we often complain that residents and visitors walk straight past the outstanding sculptures by Moore, Rodin, Hepworth and Frink without giving them a second glance. So it was a little embarrassing to realize I had been doing exactly the same, as I’d rushed through rather than explored this part of London. With sculptures spanning the past 200 years, this collection of public art has some things in common, but some key differences with the collection in Harlow.

Piccadilly has been about shopping and fashion for 200 years. Commissioning new public art is often motivated by a desire to create and deepen a sense of place. So appropriately, at the entrance to Burlington Arcade stands a jaunty Beau Brummell, a man known for spending £800 a year on clothing (more than many men today!) at a time when the average annual wage for a craftsman was £52. Brummell’s life reflects the turbulent twists and turns of Georgian society, and its easy to focus on his history and stop looking at it as a work of art. Also ignored by focusing on the history of the famous subject is the artist, in this case the fascinating Irena Sedlecká, a Czech sculptor who fled Eastern Europe in the cold war.

Connecting Piccadilly Circus with the Mall are a collection of memorials on Waterloo Place for important people, many of whom are not well known today, with their military victories or voyages discoveries faded from collective memory. The ill-fated 19th century arctic explorer John Franklin faces his early 20th century counterpart Robert Falcon Scott. The moving portrait of Scott is by the female sculptor Kathleen Scott. Kathleen married Scott after studying sculpture at the Slade School of Art and further studies in Paris. The work shows greater sensitivity to the subject than many of the overly sentimental or self-important works around it.

At the base of Colin Campbell’s portrait, a life-sized personification of Britannia is lounging on top of a reclining lion. Queen Alexandra, the long-suffering wife of Edward the VII is depicted in a cloyingly sentimental art nouveau portrait that is supposed to symbolize her charity to children. Sentimentality and cliché seem common pitfalls for artists depicting royal subjects, as Paul Day’s low relief of Queen Elizabeth the Queen Mother falls some way short of his ambition to be a 20th century Hogarth. One artist who defies being pigeonholed in a particular style is Angela Connor. In Piccadilly is a bronze work depicting Charles De Gaulle. She has also depicted Lucian Freud, John Betjeman and Laurence Olivier in her career, that began as a studio assistant to Barbara Hepworth. She is equally comfortable creating abstract kinetic sculptures, as her work in Park West Dublin and closer to home at Hatfield House in Hertfordshire shows.

We continued our walk past the recently restored Economist Building by Alison and Peter Smithson. In the courtyard outside, and perfectly in keeping with the building, are two geometrical sculptures by David Annesley. On New Bond Street Elizabeth Frink’s horse and rider has recently returned following an accident with a car (the horse was stationary at the time of the accident!). Looking down on us, the recently acquired Anthony Gormley sculpture keeps an eye on visitors going into the new public entrance to the Royal Academy. Our walk finished with Lawrence Holofcener’s The Allies - which depicts Churchill and Roosevelt. In one of the worst pieces of public art in London, this fails to capture the personality or even provide a convincing depiction of either man.

What does this varied collection have to say to us in Harlow, as custodians of an important collection of post-war public art. Context is all important, and if you were to swap the work by Irena Sedlecká of Beau Brummell and David Annesley geometric pieces the impact on the sculpture and the surroundings would be detrimental. The majority of works around Piccadilly are representational figures in bronze, an approach that has fallen from fashion as the 20th century progressed. In the post-war period, the human figure was more commonly portrayed in an abstract way, by Henry Moore, Barbara Hepworth and their contemporaries. Depicting the victories of military leaders did not chime with the post-war values at the time. The late 1940s to early 1970s is widely regarded as a golden age in British Sculpture, and this can seem a burden to contemporary artists whose work is being added to the Harlow collection. What the collection around Piccadilly shows us is that we should keep an open mind and look at each piece first as a work of art. While fashions and styles in sculpture may come and go, sculpture that is carried out with technical skill and artistic conviction in any style or material is still be capable of engaging and even moving the viewer today.