BOOK REVIEW | The Radical and Socialist Tradition in British Planning 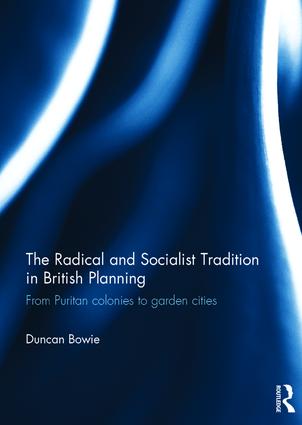 The Radical and Socialist Tradition in British Planning: From Puritan colonies to garden cities by Duncan Bowie Reviewed by Jonathan Manns

[This review appeared in the Journal of the London Society, edition 470. More details here.] D

uncan Bowie is well known within London’s urban-planning circles and his new book, The Radical and Socialist Tradition in British Planning, is a timely and useful contribution to the profession’s history. Set out as a chronological narrative of radical and socialist planning from the late-18th to early-20th century, it’s intended to redress a historiographical imbalance which has traditionally focussed heavily on the influence of middle-class philanthropists.

From its beginning with early colonial settlements of the puritan and enlightenment eras, through the long 19th century to the Garden City pioneers and institutionalisation of the planning profession, Bowie’s history manages to synthesise key information in a manner that remains comprehensive in its detail despite inevitably needing to be selective in nature.

Bowie is well placed to have written this Tradition. A lecturer at the University of Westminster, he was previously an advisor to Ken Livingstone during his tenure as Mayor of London. He also sits on the executive committee of the Socialist History Society, which, as successor to the Communist Party History Group, puts him in the footsteps of influential writers such as Christopher Hill, Eric Hobsbawm, Raphael Samuel and EP Thompson.

Where Bowie makes a clear break from this lineage is his tone, which is more reflective of modern academic analysis than the indignation of early activist-historians. Yet his work retains a discernible sense of rebellion against the ‘condescension of posterity’ as he indicates how the principles and actions of radical thinkers have been an important component of housing and planning reform, and consequently the physical evolution of urban places.

The book has a strong emphasis on London which, as the heart of the British empire, partially reflects where many plans were prepared. Likewise, there are points where the tone and analysis assumes an existing familiarity with the period. However, neither is enough to prevent a reader engaging with the topic.

The real value of this book may actually be in the lessons this history affords us today. It reminds us that planning is about choices relating to the type of society and environment we wish to live in. Also, that these necessitate decisions about how we balance public good with private gain. It reveals how the act of planning impacts on the market and vice versa; that land value and the control of land are fundamental to the implementation of proposals, and that decision- taking needs to occur at different levels. I

t’s nonetheless hard not to feel that this history has been let down somewhat by the publisher. The price tag puts it beyond the realistic reach of most curious readers at an astonishingly hefty £95, marketing it primarily at academic libraries. Even then, there’s a risk that it will struggle to attract those wandering the library stacks; there are no pictures or plans to illustrate the content and it is bound in an exceptionally dull, standardised cover. Bowie has published a comprehensive collection of primary source material on a separate website (radicalsocialistbritishplanning.wordpress.com), which goes some way to addressing this and which is a fantastic resource, even for those without access to a copy of the book.

Books surely long to have their spines bent, pages thumbed and corners turned. Bowie’s Tradition deserves this future not only as a matter of principle but for its contribution to the history of plan-making; a chapter in the story of how we have collectively shaped the places in which we live, work and play.