BOOK REVIEW | Rings Around London: Orbital motorways and the battle for homes before roads 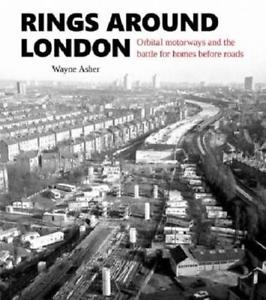 Rings Around London: Orbital motorways and the battle for homes before roads

(Review from issue 493 of the Journal of the London Society. Buy your copy of the Journal here, or get a free copy when you join the Society) This 180-page book sets out the history of the proposals to provide London with five orbital rings of urban motorways, documenting the 50-year debate between the road builders, their supporters, and those Londoners who fought them off. It is difficult now to imagine the magnitude of the impact motorway rings A, B, C, D and E would have had, but as the largest civil engineering project since the Second World War, they would have cost between 60,000 and 100,000 people their homes, almost the number that were lost during the war itself. The author, Wayne Asher’s first book, A Very Political Railway, examined the near death of the North London line – from an orbital road alignment proposal – and its rebirth as a key part of the London Overground rail network. Asher, a former journalist and evidently a thorough and organised researcher, has methodically visited archives across London, and spoken first-hand to many of those involved on both sides of the argument. The narrative clearly demonstrates how over time the ‘Predict and Provide’ system of building roads was shown to be a flawed and circular argument, with the provision of new road capacity never able to beat traffic jams. The story starts in the 1920s and 30s with no less a figure than Sir Edwin Lutyens co-authoring a report on how to solve London’s burgeoning traffic problem through the construction of many miles of new roads, including wide American-style orbital parkways. It feels odd from this distance that this particular problem was isolated as the most pressing, ahead of housing need, but one of the compelling statistics embedded in this book is a remarkable tenfold increase in cars in London between 1912 and 1934. Following the Abercrombie plan of 1944, which clearly laid out the orbital motorway rings, the narrative then charts the interaction between public authorities, thankfully never quite geographically large enough on the ground; their consultants working behind the scenes, often in secret; the powerful and well-funded roads lobby, still alive and well today; and the voices of resistance, from the first few isolated pockets to the later, increasingly well organised and vocal groups. The Treasury makes, for once, a welcome appearance, always pushing back at the cost and questioning the real benefits of the massive investments required. Without the poor governance, and resulting obstacles to road investment exposed by this book, it is clear that London would have been a transformed place - with Camden, for instance, losing a tenth of its built-up area. As the author sets out, it was a very narrowly won war, with the individual battles extending over several decades. The tide began to change in the late 60s and 70s as projects such as the Westway began to be constructed, with road and public transport planning remarkably only coming together under the one roof of the the Greater London Council from 1969, and the start of formal counter-argument against ‘Predict and Provide’. For me, one hero of this book is the late economist Michael Thomson who single-handedly refuted through reasoned evidence, not protest, the road lobby’s arguments for more and more roads. It’s a dense read, a book you feel you should take notes upon as you go through. Conscious of the constraints of publishing specialist books, the narrative would have been helped by more explanatory diagrams with perhaps a timeline; and whilst well illustrated, more commissioned maps and pictures. Get yourself a copy of the 1944 Abercrombie Plan, Sir Colin Buchanan’s misunderstood 1963 ‘Traffic in Towns’ government report, and this book and you will be able to imagine the fate London only just escaped. Neil Bennett is a Partner at architects Farrells, and vice chair of the London Society
See all posts
Top