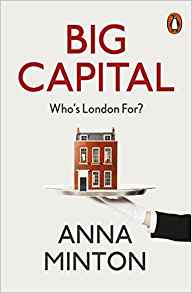 Big Capital. Who is London for?

Anna Minton is angry. From government policy to foreign investment, from property professionals to shady landlords, from greedy developer to greedy local council, a spectrum of forces has created the crisis in which we now find ourselves, where housing has gone from being a human right to a financial product. Big Capital sets out the complexity of its shape and causes, however trades balanced argument for polemic in a litany against the ills of regeneration.

Minton's ambition is to show the consequences of the workings of local and global capital on the lives of ordinary Londoners. This she does in the journalistic way that makes all of her writing pointed and accessible. It is is also her weakness, relying on examples of only the worst regeneration projects, selected statistics, and heart-tugging interviews with the dispossessed. Some of the reportage is insightful and genuinely eye-opening, but too often Minton makes knee-jerk generalisations where her research should be leading to more nuanced conclusions.

A recurring theme of the book is that council estates are being bulldozed throughout the city to make way for luxury flats that none but the very wealthy can afford. On the way, social-housing tenants are being displaced around the country or forced into giving up their tenancies altogether. But for each of her egregious examples of exploitative regeneration there are other unpublicised cases of happily housed tenants on rebuilt estates. There is cause to rally against cruelly unfair practices in the worst of cases, but why throw the baby out with the bathwater? The redevelopment of Battersea Power Station is characterised as 'a high-class gated community, like every single one of the countless other new quarters planned for London'. Such generalisations aren't helpful. She paints as one of the most grotesque distortions of our crisis foreign investors who purchase properties only to leave them empty as a kind of safe-keeping deposit. Never mind that a GLA study this year concluded that this was an infrequent occurrence and therefore an insignificant issue. A minor grievance is the characterisation of the 'evil other' played through the lens of race. The 'Chinese investor' (and also the Russian, and Middle Eastern) is now ingrained in the popular imagination as the faceless automaton of some personal self- enrichment project, a byword for all that is brutishly capitalistic about foreign investment. If the actual point is the emotional detachment of capital from homes where people live, then why use a lazy and offensive stereotype?

There is some redemption in these pages – a very readable history of postwar housing policy. And Minton is at her best questioning our received understanding of terms such as 'mixed tenure', 'estate regeneration' and 'development viability' while exposing processes of property development that otherwise remain hidden from public scrutiny. The reader should also take away the sound rebuke that supply is not the sole solution to the crisis. Disclosure: I work for an architecture practice involved in the design of new housing estates. That doesn't make me a worse or better commentator – we are all participants in this crisis whether first-time buyer or landlord, regeneration consultant or planning officer, foreign student or council tenant. Minton's appeal to all is to be angry and get political, however by diagnosing the crisis by its extreme excesses, she preaches to those already pining for deep structural change, but falls short of a balanced description of a complex situation. This review is from the latest edition of the Journal of the London Society. You can read the Journal online or purchase a printed copy, here.