BOOK REVIEW | A Place for All People 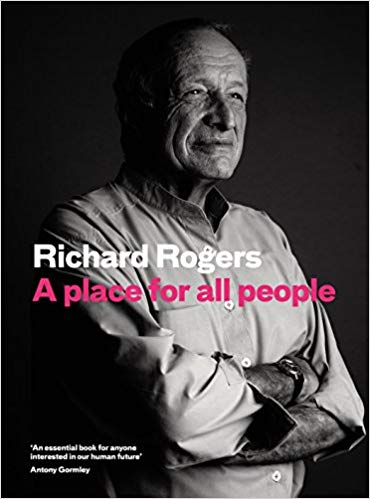 A Place for All People

Reviewed in the Journal of the London Society no. 473

There are some architects whose reputation precedes them. And then there is Richard Rogers, the original starchitect. From the first moment of this excellent coauthored autobiography the reader is plunged into Rogers’ Technicolor world of optimistic, egalitarian, wildly experimental and unapologetically modern architecture. It is impossible not to emerge starry-eyed and breathless. He and Richard Brown tell the Rogers story in a fun, accessible style that mixes personal anecdote, highlights from his career, a potted history of 20th century architecture, and political commentary. It is readable and enjoyable even for those who aren’t normally interested in architecture.

Given the ‘high-tech’ nature of his work one can be forgiven for forgetting that Richard Rogers, now in his 80s, is roughly the same generation as the Queen (who has turned 92). That means, when it comes to the history of modern architecture, he has been around for a lot of it personally. For millennials it’s like the memoir you wish your grandparents could have written, giving a fascinating personal insight into the story of post-war redevelopment and the cycles of decline and regeneration, boom and bust, Tory vs Labour, that have characterised Britain since the 1950s. All this is seen via the evolution of his own practice, highlights of which are among the most intriguing chapters in the book. It all starts with 22 Parkside, the Wimbledon home that he and his first partners built for his parents. The house, recently renovated and bequeathed to the Harvard Graduate School of Design, is actually two buildings; single-storey boxes separated by a courtyard and set back from the road in the middle of ultra-conservative Wimbledon village. Now Grade II* listed, the buildings have yellow painted steel frames, pvc-coated aluminium panel side walls dotted with portholes, bookended with glass end walls, the whole structure being held together with a neoprene jointing system. The story of 22 Parkside’s conception introduces the reader to the genesis of what becomes Rogers’ calling card: flexible, sustainable buildings typified by wide open spaces and filled with light. They draw on innovations inspired by industrial buildings to fulfil their function with an aesthetic that boldly articulates this engineering.

The trajectory of how he reaches this is told via a series of case studies and influences that culminate in the rollercoaster story of equal parts success and controversy that is the Pompidou Centre. Rogers is at pains to impress upon the reader that architecture is a team sport. Throughout the book he credits his partners, from Renzo Piano (with whom he collaborated on the Pompidou) to Graham Stirk and Ivan Harbour (now partners in his practice). This is a commendable attempt at myth busting his own legend but comes off as a little disingenuous. Rogers’ practice is all about his personal brand, he might not always be the only brains or, as he freely admits, the best draughtsman behind his now global operation but he is the figurehead; the success of his business depends on this just as much as on portholes, cantilevers and primary colours. Lord Rogers of Riverside is an awkward title for such a forthright socialist to possess, and it shows. As the book moves on to his years of political influence in the Blair government, the writing becomes extremely anxious to show Rogers in the best possible light. Anecdotes of skirmishes with Prince Charles, agonising over whether to accept his place in the House of Lords and opposition to the war in Iraq seem carefully chosen to dispel accusations of champagne socialism, but the long list of elite corporate clients in the RSHP portfolio jars with his calls for a more equal society.

The book rightly celebrates Rogers’ huge influence over the development of modern architectural language and planning policy. There are parts of this book repeated almost word for word from his 1995 Reith Lectures and 1990 Desert Island Discs interview. It is filled with an incredible array of ideas for the future but he does occasionally let his political opinions get the better of him, particularly in the last chapter where the tone becomes irritatingly preaching. The book’s most interesting observations are on the role of good architecture as a civilising influence on society. It is his consistent belief in the possibilities of sustainable design, his drive for innovation and his advocacy for public space that redeem his more verbose political statements. He comes across best as a knowledgeable, articulate and passionate architect with vast experience and insight into how we can shape our built environment for the benefit of all people. This isn’t quite the manifesto for ‘our human future’ that a quote on the back cover claims but it is still an inspiring read, reminding us of the power of a Rogers-like optimism in the face of seemingly insurmountable urban challenges. Lettie Mckie is Head of Learning at New London Architecture and the City Centre